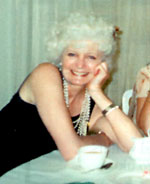 Felicity Fair Thompson has an MA in Screenwriting UAL. She is a writer, writing tutor and film maker and she lives on the Isle of Wight. Her documentary Carisbrooke Castle was broadcast on SKY TV and three of her other fourteen travel films made for the retail market were shown on Australian television.

She has taught Creative Writing for Screen South, Connexions, Isle of Wight Council, Isle of Wight College, and alongside Sir Andrew Motion for the Bi-centenary celebrations for Alfred, Lord Tennyson, as well as guiding young writers with learning difficulties, and teaching writing independently.

Exit the King, about King Charles I, performed at the 2017 Ventnor Isle of Wight Fringe Festival, and in January 2018 at Carisbrooke Castle where the King had been imprisoned, was her first stage play.
Later in 2018 Felicity co-wrote two new stage plays:
Voices over Passchendaele performed at Northwood House on the Isle of Wight over the November Armistice weekend, about the first use of ground to air wireless in the aeroplanes over the battlefield and marking 100 years since the end of WWI.
The Power Behind the Microphone about the beginnings of radio in Chelmsford, and Marconi, features the moment in 1920 when the opera star Dame Nellie Melba sang on the wireless, the first world-wide radio broadcast ever and which was due to mark that centenary and be performed at the Civic Theatre in Chelmsford, but from it instead came a short, streamed presentation to mark the moment on 15th June 2020.

Felicity’s novel Cutting In has been re-published February 2021. Like all her novels you can buy it online or from your favourite book shop. Go to our SHOP to order it direct.

The Lights of Leicester Square – The Golden Years of Cinema Felicity’s memoir about her years working in cinema management in London’s West End – OUT NOW in this special year of celebration of the Queen’s accession to the throne. Felicity was Senior Assistant Manager at the Odeon and Leicester Square Theatres, the first woman in Rank’s West End Cinema Front of House management, and surrounded by huge crowds of cinema enthusiasts, press and media buzz and all the Royal family. Movie stars, the rich and famous – and big business, very big business! This glossy hardback with over 150 fabulous photographs and a Foreword by Michael Grade is OUT NOW. And don’t miss out! Go to our SHOP to order it direct.
And see the interview with Simon Marks for BBC South Today 6.30pm News 1st April 2022  https://www.felicityfairthompson.co.uk/